The Polish surname Glodowski is derived from the Polish word "glod," meaning hunger. Glodowski was most likely originally a nickname, which then became a surname. In many instances, a patronymic name showing descent was formed by adding a suffix such as "owski," meaning "son of" to the root name. 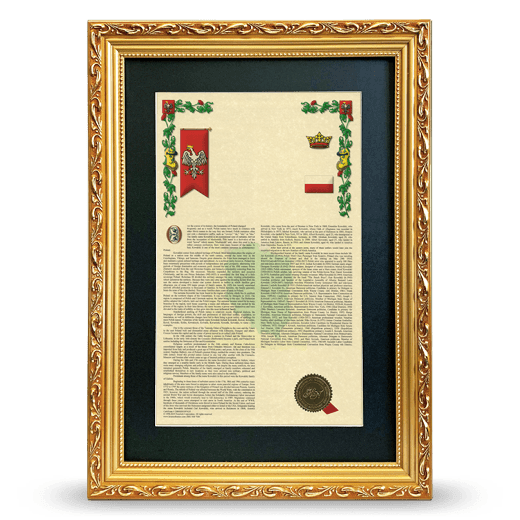 Early Origins of the Glodowski family

The surname Glodowski was first found in Wielkopolska (greater Poland,) and was likely also found in the surrounding regions of Silesia, Pomerania, Brandenburg, Galicia & East Prussia. In general, bearers of Glodowski, were affiliated with the Przegonia Clan.The origin of this clan's shield dates back to the reign of King Boleslaw Smialy [1058-1079]. Among early written references to the name was a bearer of Glodowski, recorded in the year 1457, and a member of the Dabrowa Clan.

Early History of the Glodowski family

This web page shows only a small excerpt of our Glodowski research. Another 59 words (4 lines of text) covering the years 1301, 1682, and 1765 are included under the topic Early Glodowski History in all our PDF Extended History products and printed products wherever possible.

More information is included under the topic Early Glodowski Notables in all our PDF Extended History products and printed products wherever possible.

Migration of the Glodowski family

Some of the first settlers of this family name or some of its variants were: Anton and Julianna Glodowski, who came to America in circa 1862; John Glodowski and his wife Antonina (Krefta), who left from Hamburg bound for Quebec on the ship &quot.