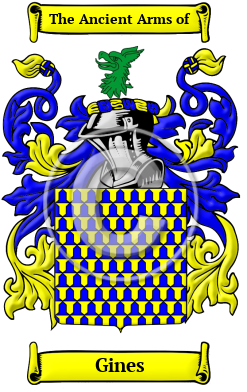 Early Origins of the Gines family

The surname Gines was first found in the town of Guisnes, near Calais in Normandy. The earliest records of the family in England were Richard de Guinnes who held eleven fees of Earl Patric in Wiltshire, William de Gines who held three fees of the Honour of Clare in Suffolk, and Ralph de Guines who held one fee of Earl Alberis de Vere in Essex. [1]

Early History of the Gines family

This web page shows only a small excerpt of our Gines research. Another 126 words (9 lines of text) covering the years 1510, 1600 and 1542 are included under the topic Early Gines History in all our PDF Extended History products and printed products wherever possible.

Spelling variations of this family name include: Geynes, Gynes, Gines, Giynes and others.

More information is included under the topic Early Gines Notables in all our PDF Extended History products and printed products wherever possible.

In the United States, the name Gines is the 13,779th most popular surname with an estimated 2,487 people with that name. [2]

Migration of the Gines family