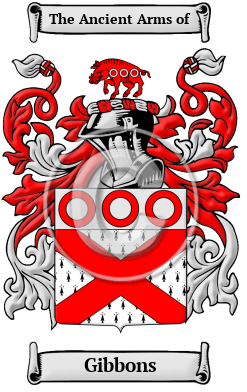 Early Origins of the Gibbons family

The surname Gibbons was first found in counties of Mayo and Limerick, where two distinct families arose shortly after Strongbow invasion of Ireland in 1172. The majority of the family hails from Mayo and were a branch of the great Burke family.

Early History of the Gibbons family

During the Middle Ages, a single person often had their name recorded by church officials and scribes many different ways. Names were typically spelt as they sounded, which resulted in many different spelling variations. The many versions of the name Gibbons to have been recorded over the years include: Fitzgibbon, Fitzgibbons, MacGibbon, Gibbon, Gibbons, Gibben, Gibbens, Gibbin, Gibbins and many more.

Gibbons migration to the United States +

In the 1840s, Ireland experienced a mass exodus to North America due to the Great Potato Famine. These families wanted to escape from hunger and disease that was ravaging their homeland. With the promise of work, freedom and land overseas, the Irish looked upon British North America and the United States as a means of hope and prosperity. Those that survived the journey were able to achieve this through much hard work and perseverance. Early immigration and passenger lists revealed many bearing the name Gibbons:

Gibbons Settlers in United States in the 17th Century

Gibbons Settlers in United States in the 18th Century

Gibbons Settlers in United States in the 19th Century

Gibbons Settlers in Canada in the 18th Century

Gibbons Settlers in Canada in the 19th Century

Gibbons Settlers in Australia in the 19th Century

Gibbons Settlers in New Zealand in the 19th Century

Historic Events for the Gibbons family +