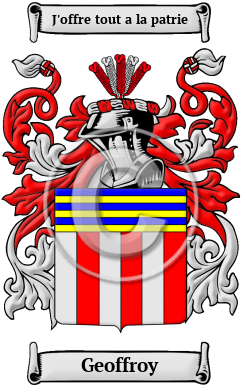 Early Origins of the Geoffroy family

The surname Geoffroy was first found in Dauphiny (French: Dauphiné or Dauphiné Viennois), a former province in southeastern France, where this eminent family has held a family seat since ancient times.

Early History of the Geoffroy family

Notable amongst the family at this time was Jean-Nicolas Geoffroy (1633-1694), French harpsichordist and organist; Étienne François Geoffroy (1672-1731), French apothecary and chemist; Claude Joseph Geoffroy (1685-1752), French apothecary, chemist and...
Another 31 words (2 lines of text) are included under the topic Early Geoffroy Notables in all our PDF Extended History products and printed products wherever possible.

In France, the name Geoffroy is the 368th most popular surname with an estimated 11,297 people with that name. [1]

Geoffroy migration to the United States +

Geoffroy Settlers in United States in the 19th Century

Geoffroy Settlers in United States in the 20th Century

Motto: J'offre tout a la patrie
Motto Translation: I offer everything to the homeland