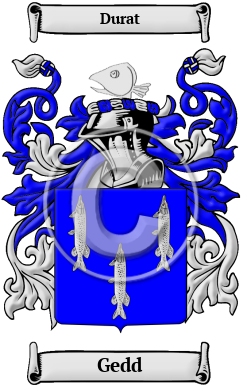 In ancient Scotland, the ancestors of the Gedd family were part of a tribe called the Picts. The name Gedd is derived from "an old family of this name, Ged of Beldridge near Dunfermline, Fife." [1]

Another source notes that the name literally means "a pike fish. The family bear three pike fishes in their arms." [2]

Early Origins of the Gedd family

The surname Gedd was first found in Fifeshire. One of the first record was Ged (no first name) who was juror on an inquest at Peebles in 1304. From this early entry, the name was silent for over 200 years as the next listing was James Ged who was Presbyter of St. Andrews diocese in 1536. A few years later, Jhone Ged, was Dean of Edinburgh and was witness to a track of the lands of Bowhous near Stirling in 1552. [1]

Early History of the Gedd family

The appearance of the printing press and the first dictionaries in the last few hundred years did much to standardize spelling. Prior to that time scribes spelled according to sound, a practice that resulted in many spelling variations. Gedd has been spelled Ged, Gedd and others.

Notable amongst the Clan at this time was William Ged (1690-1749), Scottish inventor of stereotyping, born in Edinburgh in 1690 where he was subsequently a goldsmith and jeweller. "Ged died in poverty 19 Oct. 1749, after his goods had been shipped at Leith for removal to London, where Ged desired to join his son James. James Ged...
Another 57 words (4 lines of text) are included under the topic Early Gedd Notables in all our PDF Extended History products and printed products wherever possible.

Gedd migration to the United States +

The expense of the crossing to the North American colonies seemed small beside the difficulties of remaining in Scotland. It was a long and hard trip, but at its end lay the reward of freedom. Some Scots remained faithful to England and called themselves United Empire Loyalists, while others fought in the American War of Independence. Much of this lost Scottish heritage has been recovered in the last century through Clan societies and other patriotic Scottish organizations. A search of immigration and passenger lists revealed many important, early immigrants to North America bearing the name of Gedd:

Gedd Settlers in United States in the 20th Century