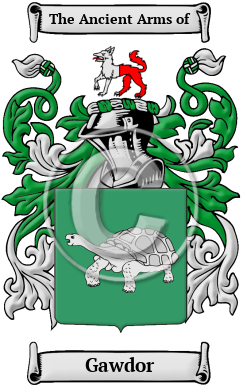 Early Origins of the Gawdor family

The surname Gawdor was first found in Gloucestershire where the family name was first referenced in the year 1221 when Reginald Gaudi held estates in that shire. However, some of the family held estates at Wallington in Norfolk at early times. "Wallington Hall, formerly the seat of the Coningsbys and the Gawdys, is a handsome mansion, situated in a well-wooded park, in which are the tower and spire of the ancient church, now a ruin." [1]

Early History of the Gawdor family

Before English spelling was standardized a few hundred years ago, spelling variations of names were a common occurrence. Elements of Latin, French and other languages became incorporated into English through the Middle Ages, and name spellings changed even among the literate. The variations of the surname Gawdor include Gawdy, Gawdey, Gaudy, Gawdie, Gaudie, Gaudey, Gordy and many more.

Migration of the Gawdor family