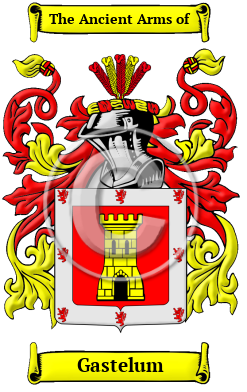 The long and noble heritage behind the name of Gastelum first began in medieval Spain. While the patronymic and metronymic surnames, which are derived from the name of the father and mother respectively, are the most common form of a hereditary surname in Spain, occupational surnames also emerged during the late Middle Ages. Since Spain was periodically dominated by both the Germanic speakingVisigoths and the Arabic and Muslim Moors in its past, it's surnames share much in common with the surnames of both of these nations. Many people, such as the Gastelum family, adopted the name of their occupation as their surname. The surname Gastelum was an occupational name for a person who worked in a castle.

Early Origins of the Gastelum family

The surname Gastelum was first found in Galicia, in the northwestern region of the Iberian peninsula.

Early History of the Gastelum family

This web page shows only a small excerpt of our Gastelum research. Another 81 words (6 lines of text) covering the year 1202 is included under the topic Early Gastelum History in all our PDF Extended History products and printed products wherever possible.

Spelling variations of this family name include: Castellano, Castellanos and others.

In the United States, the name Gastelum is the 7,979th most popular surname with an estimated 2,487 people with that name. [1]

Migration of the Gastelum family

Some of the first settlers of this family name or some of its variants were: Pedro Antonio Castellanos, who voyaged to Cuba under the orders of Velázquez, and who became a lifelong friend of Hernán Cortés, conquistador of Mexico. Other migrants to the New World bearing this surname include Juan Castellano, who sailed to America in 1512.