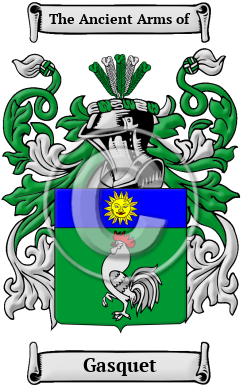 Early Origins of the Gasquet family

The surname Gasquet was first found in Provence, where this eminent family held a family seat since ancient times.

Early History of the Gasquet family

This web page shows only a small excerpt of our Gasquet research. Another 187 words (13 lines of text) covering the years 1262, 1648, 1663, 1669, and 1813 are included under the topic Early Gasquet History in all our PDF Extended History products and printed products wherever possible.

Notable amongst the names at this time was Henri Gascar (1635-1701), English portrait-painter, born at Paris in 1635, and emigrated to England about 1674 in the train or at the invitation of Louise de Keroualle, Duchess of Portsmouth. "Gascar (or Gascard, as he...
Another 43 words (3 lines of text) are included under the topic Early Gasquet Notables in all our PDF Extended History products and printed products wherever possible.

Migration of the Gasquet family

Some of the first settlers of this family name or some of its variants were: Michel Gaskett settled in Maryland, in 1774.