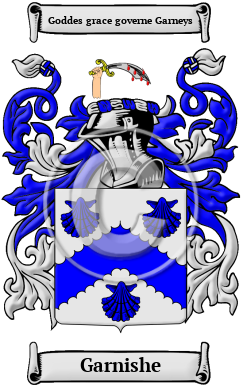 Early Origins of the Garnishe family

The surname Garnishe was first found in Suffolk where they held a family seat as Lords of the Manor. The Saxon influence of English history diminished after the Battle of Hastings in 1066. The language of the courts was French for the next three centuries and the Norman ambience prevailed. But Saxon surnames survived and the family name was first referenced in the year 1202 when Gilbert Garnoise succeeded Robert at Laxfield.

Early History of the Garnishe family

This web page shows only a small excerpt of our Garnishe research. Another 107 words (8 lines of text) covering the years 1379, 1513, 1455, 1487 and 1534 are included under the topic Early Garnishe History in all our PDF Extended History products and printed products wherever possible.

It is only in the last few hundred years that the English language has been standardized. For that reason, early Anglo-Saxon surnames like Garnishe are characterized by many spelling variations. As the English language changed and incorporated elements of other European languages, even literate people changed the spelling of their names. Scribes and monks in the Middle Ages spelled names they sounded, so it is common to find several variations that refer to a single person. The variations of the name Garnishe include: Garnish, Garneys, Garnoise, Garnays, Gareneys, Garniss, Garnies, Garness, Garnesh, Garnishe and many more.

Distinguished members of the family include Sir Christopher Garneys or Garnysse (died 1534), Chief Porter of Calais, a gentleman usher of the king's chamber in the beginning of the reign of Henry VIII. "He was the king's companion in the masquerades then popular at court, and won money at cards from his royal master. He was rewarded by an annuity of 10l., soon afterwards...
Another 64 words (5 lines of text) are included under the topic Early Garnishe Notables in all our PDF Extended History products and printed products wherever possible.

Migration of the Garnishe family

Many English families tired of political and religious strife left Britain for the new colonies in North America. Although the trip itself offered no relief - conditions on the ships were extremely cramped, and many travelers arrived diseased, starving, and destitute - these immigrants believed the opportunities that awaited them were worth the risks. Once in the colonies, many of the families did indeed prosper and, in turn, made significant contributions to the culture and economies of the growing colonies. An inquiry into the early roots of North American families has revealed a number of immigrants bearing the name Garnishe or a variant listed above: settlers, who arrived along the eastern seaboard, from Newfoundland, to Maine, to Virginia, the Carolinas, and to the islands.