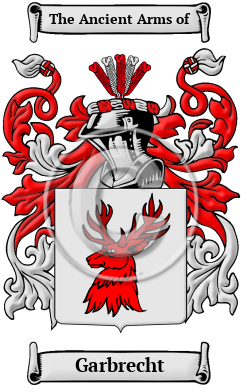 The surname Garbrecht is occupational in nature. Occupational names were derived from the common trades of the medieval era and transcended European cultural and linguistic boundaries. This phenomenon is demonstrated by names such as the German name Schumaker, which means a maker of shoes, the Ashkenazic Jewish name Zimmerman, which means carpenter, and the Polish and Jewish name Stolarski, which means joiner. Similarly, surnames of office, which include military, judicial, papal and other positions of authority, are widespread throughout Europe. Those who were involved in the military, or feudal armies, were given names such as the English Archer and the French Chevalier. Names that were derived from judicial and papal titles, such as Bailiffe, Squire and Abbott, are commonly seen with the same surname spelling today. The name Garbrecht is derived from the Old German word "ledargarawo," meaning "leather preparer" which later became "gerwer" and "gerber." Accordingly, the original bearer of this name held the trade of a leather tanner.

Early Origins of the Garbrecht family

The surname Garbrecht was first found in Silesia, where this family was established in the Middle Ages.

Early History of the Garbrecht family

Notables of the period with the surname Garbrecht were Sir Balthazar Gerbier (1591?-1667), a "painter, architect, and courtier, born about 1591 at Middelburg, in Zeeland, was the son of Anthony Gerbier, by his wife, Radigonde Blavet, protestant refugees from France. 'My Great Grand-father,' he gave out, 'was Anthony Gerbier, the Baron Doully,' and he at one time assumed in England the title of Baron Douvilly, though his claims are doubtful." [1] Heinrich Nicolaus Gerber, born 1702 in the principality of Schwarzburg; son of a peasant, studied at the University of Leipzig, where his love of music found encouragement in the teaching and...
Another 162 words (12 lines of text) are included under the topic Early Garbrecht Notables in all our PDF Extended History products and printed products wherever possible.

Migration of the Garbrecht family