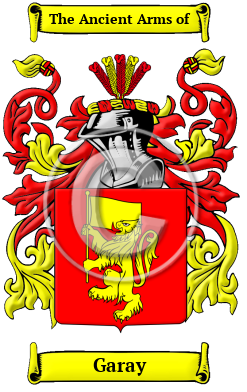 Early Origins of the Garay family

The surname Garay was first found in Navarre, one of the medieval Christian kingdoms of northern Spain.

Early History of the Garay family

This web page shows only a small excerpt of our Garay research. Another 220 words (16 lines of text) covering the years 1516, 1516, 1528, 1583, 1580 and 1523 are included under the topic Early Garay History in all our PDF Extended History products and printed products wherever possible.

Notable bearers of the family name Garay Juan de Garay (1528-1583), Spanish conquistador, Governor of Asunción (present day Paraguay) and founded a number of cities in Argentina, including...
Another 28 words (2 lines of text) are included under the topic Early Garay Notables in all our PDF Extended History products and printed products wherever possible.

In the United States, the name Garay is the 4,577th most popular surname with an estimated 7,461 people with that name. [1]

Garay migration to the United States +

Garay Settlers in United States in the 17th Century

Garay Settlers in United States in the 19th Century