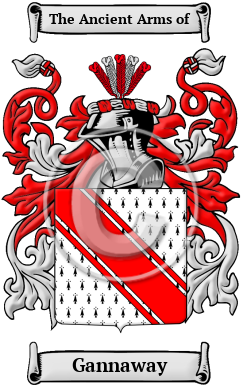 Early Origins of the Gannaway family

Early History of the Gannaway family

Before English spelling was standardized a few hundred years ago, spelling variations of names were a common occurrence. Elements of Latin, French and other languages became incorporated into English through the Middle Ages, and name spellings changed even among the literate. The variations of the surname Gannaway include Genewy, Genway, Gannaway, Jennaway, Janaway, January, Jennery, Jeneway, Janoway, Janeway, Janaway and many more.

Distinguished members of the family include James Janeway (1636-1674), a Puritan minister and children's author, second in popularity only to John Bunyan. He was the fourth son of William Janeway, and younger brother of John Janeway [q. v.], was born about the end of 1636 at...
Another 46 words (3 lines of text) are included under the topic Early Gannaway Notables in all our PDF Extended History products and printed products wherever possible.

In the United States, the name Gannaway is the 13,520th most popular surname with an estimated 2,487 people with that name. [5]

Migration of the Gannaway family