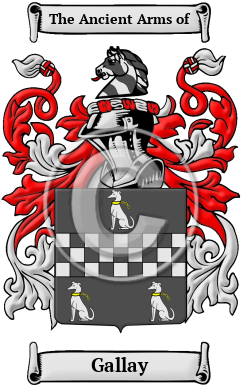 The name Gallay has been recorded in British history since the time when the Anglo-Saxons ruled over the region. The name is assumed to have been given to someone who was a galley-man. One source notes that these people were "rowers" [1] while another notes that "these were commonly called gallie-men, as men that came up in the gallies, who brought up wines and other merchandizes, which they landed in Thames-strete, at a place called Galley- key." [2]

Early Origins of the Gallay family

The surname Gallay was first found in Yorkshire where Henry Galye was first listed in the Assize Rolls of 1219. Years later, Adam del Galay was listed in 1304. [1]

Early History of the Gallay family

The first dictionaries that appeared in the last few hundred years did much to standardize the English language. Before that time, spelling variations in names were a common occurrence. The language was changing, incorporating pieces of other languages, and the spelling of names changed with it. Gallay has been spelled many different ways, including Galley, Gallie, Gally, Galey, Gally and others.

Distinguished members of the family include Henry Gally (1696-1769), English divine and classical scholar, son of the Rev. Peter Gally, a French Protestant refugee, was born at Beckenham, Kent, in August 1696. He was admitted a pensioner of Corpus Christi College, Cambridge, under the tuition of Mr. Fawcett...
Another 47 words (3 lines of text) are included under the topic Early Gallay Notables in all our PDF Extended History products and printed products wherever possible.

Migration of the Gallay family

Thousands of English families in this era began to emigrate the New World in search of land and freedom from religious and political persecution. Although the passage was expensive and the ships were dark, crowded, and unsafe, those who made the voyage safely were rewarded with opportunities unavailable to them in their homeland. Research into passenger and immigration lists has revealed some of the very first Gallays to arrive in North America: John Galley purchased land in Salem, Massachusetts in 1637. In the same year Thomas Galley landed on the island of St. Christopher; William Galley settled in Virginia in 1637.