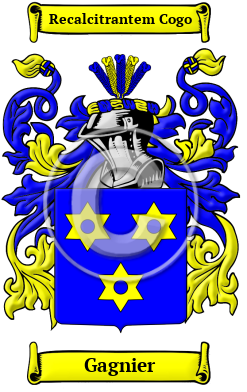 The Gagnier surname is thought to come from the Old French word "gagner", which meant to "till" or "cultivate" the land. As such, the name Gagnier was likely originally an occupational name for a farmer or cultivator. The more popular spelling Gagné or Gagne literally translates from French as "earn" or "win."

Early Origins of the Gagnier family

The surname Gagnier was first found in Burgundy (French: Bourgogne), an administrative and historical region of east-central France where the family held a family seat from ancient times.

Early History of the Gagnier family

Notable amongst the family at this time was Jean-Baptiste Gagne, President of the Financial Chamber in 1685. John Gagnier (1670?-1740), was an English Orientalist, born in Paris about 1670, and educated at the College of Navarre. "After taking orders he...
Another 38 words (3 lines of text) are included under the topic Early Gagnier Notables in all our PDF Extended History products and printed products wherever possible.

In the United States, the name Gagnier is the 18,222nd most popular surname with an estimated 2,487 people with that name. [3]

Gagnier Settlers in Canada in the 17th Century