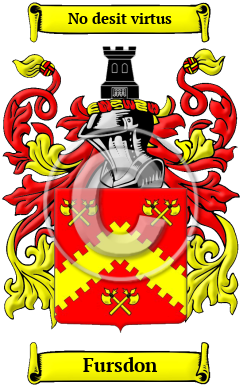 The ancestors of the Fursdon surname lived among the ancient Anglo-Saxon culture. The name comes from when they lived in an area of Devon that contained large amounts of the furze plant. This plant was a prickly shrub with yellow flowers and was often found in large amounts covering a heath.

Early Origins of the Fursdon family

The surname Fursdon was first found in Devon at Fursdon, a historic house and farming estate. "From the days of Henry III, if not from an earlier period, this ancient family has resided at this place from whence the name is derived." [1]

Early History of the Fursdon family

This web page shows only a small excerpt of our Fursdon research. Another 61 words (4 lines of text) covering the years 1340, 1620 and 1638 are included under the topic Early Fursdon History in all our PDF Extended History products and printed products wherever possible.

Before English spelling was standardized a few hundred years ago, spelling variations of names were a common occurrence. Elements of Latin, French and other languages became incorporated into English through the Middle Ages, and name spellings changed even among the literate. The variations of the surname Fursdon include Furse, Furze, Fursdon, Fursdonne and others.

Another 44 words (3 lines of text) are included under the topic Early Fursdon Notables in all our PDF Extended History products and printed products wherever possible.

Fursdon migration to the United States +

Fursdon Settlers in United States in the 17th Century

Motto: No desit virtus
Motto Translation: No lack of power