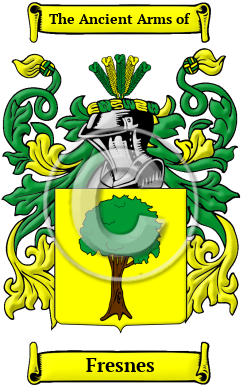 The Fresnes surname comes from the name of the village of Fresne, which was in the province of Bourgogne. During the late Middle Ages in France, as hereditary surnames began to be adopted names that were derived from localities became increasingly widespread; sometimes these names could proprietorship of the village or estate.

Early Origins of the Fresnes family

The surname Fresnes was first found in Burgundy (French: Bourgogne), an administrative and historical region of east-central France, where this family has held a family seat since ancient times. The name is derived from the Old French word for "ash" as in Ash tree from the Latin: fraxinus.

Throughout the centuries the family prospered, and branched to several regions in France. One branch originated from Artois, where Thibaut, Sieur of Fresnes, was a servant to the Duke of Bourgogne in 1358. Members were acknowledged and honored for their outstanding service. Colart de Fresne was a knight in 1410. Claude de Fresne was Lord of Fresne and Fleurey in 1472.

Among his descendants were: Étienne, who was titled Knight of Malta, and, in recognition of his outstanding service on the battlefield, was promoted to Commander of Vaufranche in Berry in the 15th century; Chretien, Captain of one hundred soldiers, who was killed at the Battle of Saint-Quentin; François, Captain of Montbard; another François who was a battle marshal in 1652, then became Captain of the Château of Montreal; and René, who was a ship's captain.

Adding to the mentioned members who proudly carried this name are Barthélemy, who became the Canon of Autun in 1404, Jean, who was a skilled horseman and became the Lord of Saint-Albin, and Philibert, who was in charge of the Château of Semur-en-Brionnais. This esteemed family held the titles of the Barons and Counts of Fresne, and the Barons of Saint-Beury and Villiers, as well as holding a fair number of fiefs. Today, the province of Bourgogne is especially proud of being associated with a dedicated family.

Early History of the Fresnes family

This web page shows only a small excerpt of our Fresnes research. Another 40 words (3 lines of text) covering the years 1253, 1315, 1610 and 1688 are included under the topic Early Fresnes History in all our PDF Extended History products and printed products wherever possible.

Another 28 words (2 lines of text) are included under the topic Early Fresnes Notables in all our PDF Extended History products and printed products wherever possible.

Migration of the Fresnes family

Some of the first settlers of this family name or some of its variants were: André Fresneau, who settled in Boston, Massachusetts in 1705;as well as Albert Fresne, who settled in Philadelphia with his wife and two children in 1787..