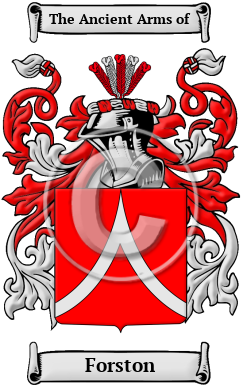 Early Origins of the Forston family

The surname Forston was first found in Baden, where the name was anciently associated with the tribal conflicts of the area. They declared allegiances to many nobles and princes of early history, lending their influence in struggles for power and status within the region. They branched into many houses, and their contributions were sought by many leaders in their search for power.

Early History of the Forston family

Notables with the surname Forston during this period were Moses Israel Fürst (died ca. 1692), a merchant and financier of Hamburg, Germany. Füstenau was a family of distinguished flutists and good musicians. Caspar, born Feb. 26, 1772, at Münster, where his father was in the Bishop's band; was early left an orphan under the care of A. Romberg, who tried to force him to learn the bassoon, as well as the oboe, which he had been already taught; but his preference for the flute asserted itself, and he shortly became so proficient, as to support his family by playing in a...
Another 117 words (8 lines of text) are included under the topic Early Forston Notables in all our PDF Extended History products and printed products wherever possible.

Forston migration to the United States +

Forston Settlers in United States in the 17th Century