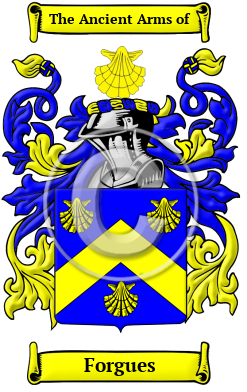 Early Origins of the Forgues family

The surname Forgues was first found in Touraine.

Early History of the Forgues family

This web page shows only a small excerpt of our Forgues research. Another 51 words (4 lines of text) covering the years 1580, 1811, 1823, 1836, 1842, and 1860 are included under the topic Early Forgues History in all our PDF Extended History products and printed products wherever possible.

Spelling variations of this family name include: Forge, Forgeron, Forgue, Forgues and others.

Notable at this time was Germain Forget, born in 1580, who published law books, poems, and other works. Paul-Emile Daurand-Forgues, also known as "Old Nick", started his journalism career in the southern region of Languedoc but ended up in Paris as a lawyer; Amédée Forget was a doctor in Chartres in 1811; Victor-Esprit-Emile Forgues, born in 1823, entered into the Conservatory of Music, where...
Another 63 words (4 lines of text) are included under the topic Early Forgues Notables in all our PDF Extended History products and printed products wherever possible.

In Quebec, Canada, the name Forgues is the 734th most popular surname. [1]

Forgues Settlers in Canada in the 17th Century