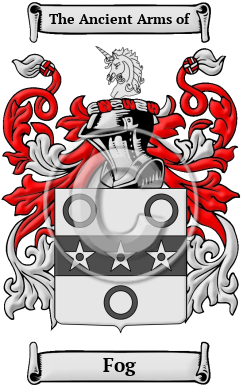 The origins of the Fog name lie with England's ancient Anglo-Saxon culture. It comes from when the family lived in the area that was referred to as the fogge, a Old English word which means the grass that was left to grow once the hay had been cut. The surname Fog also has occupational origins when it refers a farmer who had grazing cattle on the grass during the winter months.

Early Origins of the Fog family

The surname Fog was first found in Kent or perhaps Lancashire. Lower states that "it is an ancient Kentish family," [1] while Bardsley claims the name is a "well-known Lancashire surname. " [2]

Early records of the family are scarce, but we did find record of Thomas Fogg, in Norfolk in 1509 [3] and Robert Fogg, of Radcliffe, yeoman in Cheshire in 1592. [2]

Phileas Fogg, the fictional protagonist Jules Verne's novel Around the World in Eighty Days was inspired by the American writer and adventurer William Perry Fogg (1826-1909.)

Early History of the Fog family

Before the last few hundred years, the English language had no fast system of spelling rules. For that reason, spelling variations are commonly found in early Anglo-Saxon surnames. Over the years, many variations of the name Fog were recorded, including Fogg, Fogge, Foge, Fog and others.

Migration of the Fog family

To escape oppression and starvation at that time, many English families left for the "open frontiers" of the New World with all its perceived opportunities. In droves people migrated to the many British colonies, those in North America in particular, paying high rates for passages in cramped, unsafe ships. Although many of the settlers did not make the long passage alive, those who did see the shores of North America perceived great opportunities before them. Many of the families that came from England went on to make essential contributions to the emerging nations of Canada and the United States. Research into various historical records revealed some of first members of the Fog family emigrate to North America: Whitting Fogg who settled in Virginia in 1653; Ralph Fogg settled in Salem Massachusetts in 1630; John Fogg settled in Boston in 1630; William Fogg settled in Virginia in 1773..