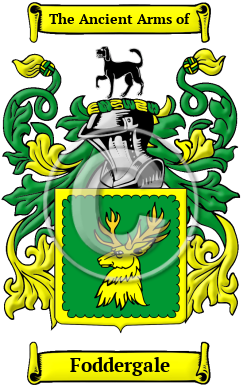 Early Origins of the Foddergale family

The surname Foddergale was first found in Cumberland (now called Cumbria) at Fothergill, a seaside hamlet with a headland named Fothergill Head.

Early History of the Foddergale family

During the era when a person's name, tribe and posterity was one of his most important possessions, many different spellings were found in the archives examined. Foddergale occurred in many references, and spelling variations of the name found included Fothergill, Fothergil, Fottinghaul, Fotterall and others.

Notable amongst the family name during their early history was The Reverend Marmaduke Fothergill (1652-1731), a Yorkshire clergyman, scholar of Christian liturgy and collector of books. His donated collection is held as the Fothergill Collection at York Minster Library. Anthony Fothergill (1685?-1761), was an English theological writer, the youngest son of Thomas Fothergill of Brownber, Ravenstonedale, Westmorland. "Like his forefathers and descendants for many generations he owned Brownber, and lived and died there. Though he is said to have had no 'liberal education,' he published several theological works. " He seems to have acted as...
Another 93 words (7 lines of text) are included under the topic Early Foddergale Notables in all our PDF Extended History products and printed products wherever possible.

Migration of the Foddergale family

Gradually becoming disenchanted with life in Ireland many of these uprooted families sailed aboard the armada of sailing ships known as the "White Sails" which plied the stormy Atlantic. These overcrowded ships often arrived with only 60 to 70% of their original passenger list, many dying of illness and the elements, were buried at sea. In North America, early immigrants bearing the family name Foddergale, or a spelling variation of the surname include: James Fottinghaul who settled in New York in 1822 with his wife and five children; William Fothergill settled in Maryland in 1732; another William Fothergill arrived in Philadelphia in 1802.