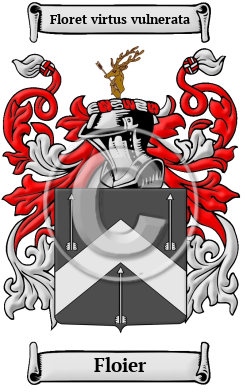 Early Origins of the Floier family

The surname Floier was first found in Devon where they held a family seat "at Floyer-Hayes, in the parish of St. Thomas in that county, soon after the Norman Conquest." [1] The estate remained in the family until the latter part of the 17th century.

"Burke says, that the pedigree of the Floyers of co. Dorset is 'authentically deduced from Floierus, who settled soon after the Norman Conquest on the lands beyond the river Exe, co. Devon, whence the name of Floiers-Landa and Floiers-Hayes.' " [2]

Early History of the Floier family

Distinguished members of the family include Sir John Floyer (1649-1734), English physician and writer of Hints Hall, Staffordshire, a since demolished country house. He was the son of Richard Floyer of Hintes, Staffordshire. "He entered as commoner of Queen's College, Oxford, at the beginning of 1664, being then fifteen years of age. He was B.A. 16 April 1668, M.A. 1671, B.M. 27 June 1674, B.M...
Another 65 words (5 lines of text) are included under the topic Early Floier Notables in all our PDF Extended History products and printed products wherever possible.

Migration of the Floier family

To escape the unstable social climate in England of this time, many families boarded ships for the New World with the hope of finding land, opportunity, and greater religious and political freedom. Although the voyages were expensive, crowded, and difficult, those families that arrived often found greater opportunities and freedoms than they could have experienced at home. Many of those families went on to make significant contributions to the rapidly developing colonies in which they settled. Early North American records indicate many people bearing the name Floier were among those contributors: J. Flayer, aged 42, who arrived in America in 1924.