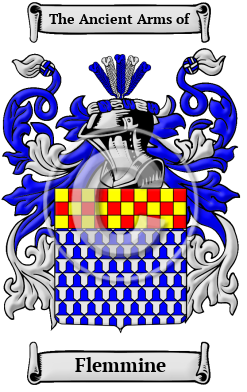 Flemmine is a name that originated amongst the industrious people of Flanders The name came to Ireland with the Anglo-Norman settlers that followed the Strongbow led invasions of 1171 and 1172.

The Flemmine name is derived from the Old French word "flamanc," which means a " Flemish person" or simply a "Fleming."

Early Origins of the Flemmine family

The surname Flemmine was first found in the eastern Irish county of Meath. There, the family acquired considerable estates and built the Castle Slane.

In the early days there was much movement throughout what is now known as the British Isles. We note this entry for the family in Saltash, Cornwall: "This manor, which extends its jurisdiction into several parishes in Cornwall and Devonshire, belonged formerly to the ancient family of Fleming in Devonshire, Barons of Slane in Ireland. By the sons of a sister, and one of the co-heiresses of the Fleming family, it was sold in the sixteenth century to Thomas Wyvell, Esq. from whose family it passed by a female heir to the ancestor of Francis Wills, Esq. of Saltash, the present proprietor. " [1]

"It is probable that Manely Fleming [in the parish of St. Veep, Cornwall] belonged originally to the ancient family of Flemings, since they bear one common name." [1]

Early History of the Flemmine family

Of note in the family at this time was Nicholas Fleming, Archbishop of Armagh from 1404 to 1416, best known for his "Fleming's Register"; Rev. Richard Fleming, SJ (1542-1590), professor of philosophy in Paris, regarded as...
Another 35 words (2 lines of text) are included under the topic Early Flemmine Notables in all our PDF Extended History products and printed products wherever possible.

Migration of the Flemmine family

Some of the first settlers of this family name or some of its variants were: Elizabeth Fleming, who arrived in Virginia in 1650; Christopher Fleming, who settled in Virginia in 1653; James, John, Joseph, Martin, Richard, Samuel, Thomas, and William Fleming who all came to Philadelphia Pa. between 1840 and 1860. The following works may prove helpful for further research: &quot.