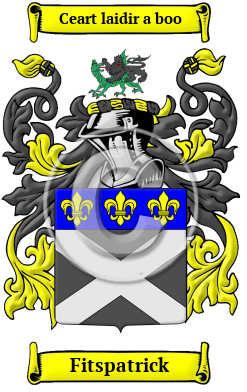 Most of the old Irish surnames that can be found throughout the world today have their roots in the Gaelic language. The original Gaelic form of the name Fitspatrick is Mac Giolla Phadraig, denoting a devotee of St. Patrick. This is the only native-Irish surname with the prefix "Fitz", as all others descend from the Normans.[1]

Early Origins of the Fitspatrick family

The surname Fitspatrick was first found in Ossory (Irish: Osraige), the former Kingdom of Ossory, now county Kilkenny, located in Southeastern Ireland in the province of Leinster, where they were the traditional Princes of Ossary, claiming descent from the O'Connors [2] and Giolla Padraig, a warlike chief in Ossary who lived in the second half of the 10th century. [1]

Early History of the Fitspatrick family

Individual scribes in the Ireland during the Middle Ages would often record a person's name various ways. How the name was recorded depended on what that particular scribe believed the proper spelling for the name pronounced to him was. Spelling variations revealed in the search for the origin of the Fitspatrick family name include Fitzpatrick, Fitzpatricks, Kilpatrick, Shera, Sherar, Sherra, Patchy, Patchie, Parogan, Parrican, Fitz, MacGilpatrick, McGilpatrick, MacIlpatrick, McIlpatrick, MacSherra, McSherra, McShera, MacShera, Sheera, McSheera and many more.

Notable amongst the family name at this time was Sir Barnaby Fitzpatrick, (1535?-1581), one of the first to submit to Henry VII and was knighted for his allegiance in 1558. He was the son and heir of Brian Fitzpatrick or MacGillapatrick, first lord...
Another 43 words (3 lines of text) are included under the topic Early Fitspatrick Notables in all our PDF Extended History products and printed products wherever possible.

Fitspatrick migration to the United States +

The 19th century saw a great wave of Irish migrating out of their homeland in a great measure due to the oppressive imperial policies of the English government and landowners. Many of these Irish families sailed to North America aboard overcrowded passenger ships. By far, the largest influx of Irish immigrants to North America occurred with Great Potato Famine during the late 1840s. These particular immigrants were instrumental in creation of the United States and Canada as major industrial nations because the many essential elements such as the roadways, canals, bridges, and railways required an enormous quantity of cheap labor, which these poor immigrants provided. Later generations of Irish in these countries also went on to make valuable contributions in such fields as the arts, commerce, politics, and education. Extensive research into immigration and passenger lists has revealed many early immigrants bearing the name Fitspatrick:

Fitspatrick Settlers in United States in the 19th Century