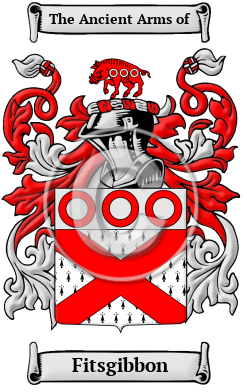 Early Origins of the Fitsgibbon family

The surname Fitsgibbon was first found in counties of Mayo and Limerick, where two distinct families arose shortly after Strongbow invasion of Ireland in 1172. The majority of the family hails from Mayo and were a branch of the great Burke family.

Early History of the Fitsgibbon family

During the lifetime of an individual person, his name was often spelt by church officials and medieval scribes the way it sounded. An examination of the many different origins of each name has revealed many spelling variations for the name: Fitzgibbon, Fitzgibbons, MacGibbon, Gibbon, Gibbons, Gibben, Gibbens, Gibbin, Gibbins and many more.

Migration of the Fitsgibbon family

Ireland's Great Potato Famine left the country's inhabitants in extreme poverty and starvation. Many families left their homeland for North America for the promise of work, freedom and land ownership. Although the Irish were not free of economic and racial discrimination in North America, they did contribute greatly to the rapid development of bridges, canals, roads, and railways. Eventually, they would be accepted in other areas such as commerce, education, and the arts. An examination of immigration and passenger lists revealed many bearing the name Fitsgibbon: Daniel, George, John, Michael, James, Nicholas, and Patrick Fitzgibbon who all arrived in Philadelphia between 1840 and 1865; Ann Gibbon settled in Virginia in 1660.