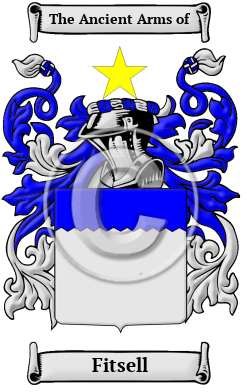 The name Fitsell is an Anglo-Norman surname, brought to Ireland during the invasions of the 13th century. It comes from a town in Surrey called Fitznell, which was named for a Norman landowner, Robert Fitznel.

Early Origins of the Fitsell family

The surname Fitsell was first found in Ulster (Irish: Ulaidh), where it occurs eleven times in the Antrim Hearth Money Rolls of 1669, along with a few more entries in neighboring counties.

Early History of the Fitsell family

This web page shows only a small excerpt of our Fitsell research. Another 28 words (2 lines of text) are included under the topic Early Fitsell History in all our PDF Extended History products and printed products wherever possible.

More information is included under the topic Early Fitsell Notables in all our PDF Extended History products and printed products wherever possible.

Migration of the Fitsell family

Some of the first settlers of this family name or some of its variants were: Thomas Fizzell, who settled in Maryland in 1658; Rebecca Fitzele and her family, who arrived in New York in 1851; John Fizzell, who was naturalized in Philadelphia in 1851.