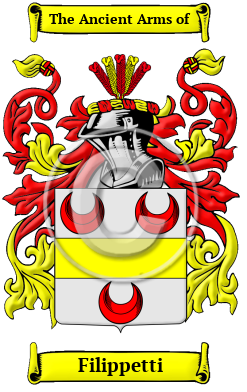 The Italian surname Filippetti is a patronymic name created from the first name of a male ancestor. As a first name, it is derived from the Latin "Philippus," which is in turn derived from the Greek "Philipp•s." This name is composed of the element "philos" which means "friend," and "hippos," meaning "horse." Thus the surname literally means "son of one who is a lover of horses." This name became common throughout Europe due to several saints and monarchs who bore the name.

Early Origins of the Filippetti family

The surname Filippetti was first found in the ancient city of Arcevia, where a record from 1238 showed a Corrado di Filippino, who owned Castle Montesecco.

Early History of the Filippetti family

This web page shows only a small excerpt of our Filippetti research. Another 72 words (5 lines of text) covering the years 1625, 1457, 1574, 1536, 1602, 1830 and 1859 are included under the topic Early Filippetti History in all our PDF Extended History products and printed products wherever possible.

Prominent among members of the family was Fra Filippo Lippi, a famous Florentine painter of the 15th century. He was influenced by Massaccio, and painted much for the Medici family, the rulers at the time. Another famous painter was Filippino Lippi, born in Prato in 1457, who worked in Florence under Botticelli and has works today in London, Florence, and around the United States. Camillo Filippi (died 1574) was an Italian painter who flourished about the middle of the 16th century. His son, Sebastiano Filippi (c. 1536-1602) was an Italian late Renaissance - Mannerist painter of the School of Ferrara. Gaspare...
Another 100 words (7 lines of text) are included under the topic Early Filippetti Notables in all our PDF Extended History products and printed products wherever possible.

Migration of the Filippetti family