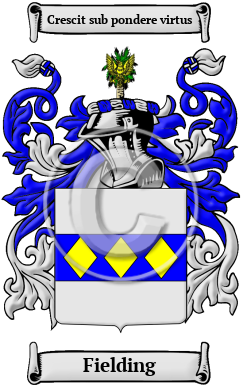 Early Origins of the Fielding family

The surname Fielding was first found in Cheshire, where the name is derived from the Old English word, "felding" meaning "a dweller in an open place." "The princely extraction of this noble family from the counts of Hapsburg in Germany is well known; its ancestor, Galfridus, or Geffrey, came into England in the twelfth year of the reign of Henry III., and received large possessions from that monarch." [1]

A document dated 9 Edward II., states: " Filius Galfridi filii Galfridi, comitis de Hapsburg et domini in Laufenburg et RinFILDING in Germania." [2] In other words, the name is derived from RinFelden or RinFilding in Germany where they held patrimonial possessions of the house of Hapsburg. John Fildying held Newham in Warwickshire in the twelfth of Henry VI., inherited by his mother Joan, daughter and heir of William Prudhome.

Early History of the Fielding family

Migration of the Fielding family to Ireland

Some of the Fielding family moved to Ireland, but this topic is not covered in this excerpt. More information about their life in Ireland is included in all our PDF Extended History products and printed products wherever possible.

Fielding migration to the United States +

Fielding Settlers in United States in the 17th Century

Fielding Settlers in United States in the 18th Century

Fielding Settlers in United States in the 19th Century

Fielding Settlers in Canada in the 18th Century

Fielding Settlers in Australia in the 19th Century

Fielding Settlers in New Zealand in the 19th Century

Fielding Settlers in West Indies in the 18th Century

Historic Events for the Fielding family +