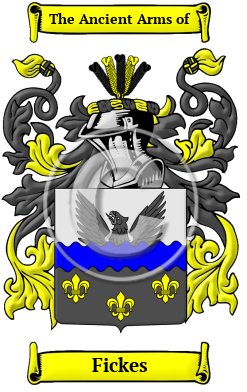 The surname Fickes and its many variants can be found today in many countries, including England, Holland, and Ireland, but its origins lie in the Saxony region of Germany. The name was first derived as a diminutive of the first name Friedrich, which was itself derived from the Old High German words "Fridu," meaning "peace," and "Rihhi," meaning "power."

Early Origins of the Fickes family

Early History of the Fickes family

Another 44 words (3 lines of text) are included under the topic Early Fickes Notables in all our PDF Extended History products and printed products wherever possible.

In the United States, the name Fickes is the 18,233rd most popular surname with an estimated 2,487 people with that name. [1]

Migration of the Fickes family

Some of the first settlers of this family name or some of its variants were: Peter Feck and his wife Anna Maria, who emigrated from the Palatinate to New York in 1709 with their four children, Peter Feck, one of the German settlers of Tulpehocken, Pennsylvania in 1723.