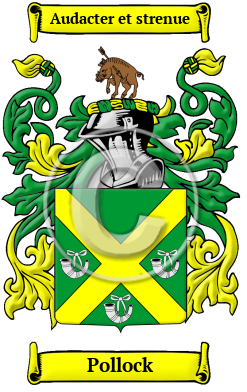 Among the all the peoples of ancient Scotland, the first to use the name Pollock were the Strathclyde- Britons. It was a name for someone who lived at Pollok (Gaelic: Pollag), a large district on the south-western side of the city of Glasgow, home to Crookston Castle, where Mary, Queen of Scots, was once held. The name of the town has Gaelic origins, from the word 'poll', meaning "pool" or "pit".

Early Origins of the Pollock family

The surname Pollock was first found in Renfrewshire (Gaelic: Siorrachd Rinn Friù), a historic county of Scotland, today encompassing the Council Areas of Renfrew, East Renfrewshire, and Iverclyde, in the Strathclyde region of southwestern Scotland, where the first occurrence of the name is Peter, son of Fulbert or Fulburt who was granted the lands of Upper Pollock by the High Steward, and who took the surname from the lands, making him the first Pollock. Peter gave the church of Pulloc and its pertinents to the monastery of Paisley, sometime between 1177 and 1199. Within that same period of time, he also confirmed the charter of his brother Helias of Perthic to the same house. Peter also possessed lands in Moray and circa 1175, he witnessed the charter by William the Lion granting Burgin to the Abbey of Kinlos. [1]

Early History of the Pollock family

This web page shows only a small excerpt of our Pollock research. Another 220 words (16 lines of text) covering the years 1234, 1272, 1590, 1603, 1827, 1660 and are included under the topic Early Pollock History in all our PDF Extended History products and printed products wherever possible.

The variation in the spelling of Medieval names is a result of the lack of spelling rules in the English language prior to the last few hundred years. Before that time, scribes spelled according to sound, often varying the spelling of name within a single document. Pollock has appeared as Pollock, Pollocke, Polk, Polke, Pollok, Pollick, Polloch, Pook, Pooke, Poock, Pogue, Poag, Poage, Poague, Poak and many more.

More information is included under the topic Early Pollock Notables in all our PDF Extended History products and printed products wherever possible.

Migration of the Pollock family to Ireland

Some of the Pollock family moved to Ireland, but this topic is not covered in this excerpt.
Another 96 words (7 lines of text) about their life in Ireland is included in all our PDF Extended History products and printed products wherever possible.

Pollock migration to the United States +

Pollock Settlers in United States in the 17th Century

Pollock Settlers in United States in the 18th Century

Pollock Settlers in United States in the 19th Century

Pollock Settlers in United States in the 20th Century

Pollock Settlers in Canada in the 19th Century

Pollock Settlers in Australia in the 19th Century

Pollock Settlers in New Zealand in the 19th Century

Historic Events for the Pollock family +