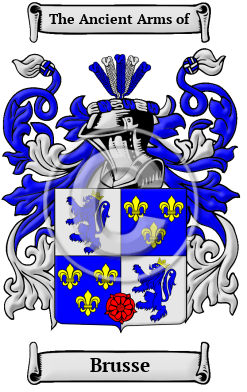 Early Origins of the Brusse family

The surname Brusse was first found in Languedoc, where the family has been anciently seated from very early times.

By the 14th century the family had prospered and branched to Varennes in Lyonnais, as well as to Provence. Throughout the centuries the family became well established in the region of Languedoc and as a noble family of France, the members were confirmed with letters of patent and heraldic cap. They contributed largely to the political as well as the cultural scene.

Early History of the Brusse family

This web page shows only a small excerpt of our Brusse research. Another 171 words (12 lines of text) covering the years 1702, 1765, 1789, 1792, and 1800 are included under the topic Early Brusse History in all our PDF Extended History products and printed products wherever possible.

Notable amongst the family name at this time was Sébastien de Brossard (1655-1730), a French music theorist, composer and collector. He was the author of the first musical dictionary, published under the title of 'Dictionnaire de musique contenant une explication des termes grecs et latins, italiens et français les plus usités dans la musique,'...
Another 53 words (4 lines of text) are included under the topic Early Brusse Notables in all our PDF Extended History products and printed products wherever possible.

Brusse migration to the United States +

Brusse Settlers in United States in the 19th Century