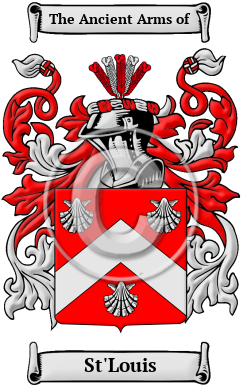 Early Origins of the St'Louis family

The surname St'Louis was first found in Brittany, where the family held a family seat since ancient times.

It is generally thought that Louis IX (1214-1270), commonly known as Saint Louis, was the originator of the name. He is the only King of France to be canonized in the Catholic Church. He was crowned in Reims at the age of 12, following the death of his father Louis VIII (1187-1226), nicknamed the Lion, King of France from 1223 to 1226.

Early History of the St'Louis family

This web page shows only a small excerpt of our St'Louis research. Another 70 words (5 lines of text) covering the years 1692, 1792, and 1814 are included under the topic Early St'Louis History in all our PDF Extended History products and printed products wherever possible.

Spelling variations of this family name include: St-Louis, St Louis, St. Louis, Saint-Louis and many more.

More information is included under the topic Early St'Louis Notables in all our PDF Extended History products and printed products wherever possible.

St'Louis Settlers in Canada in the 18th Century