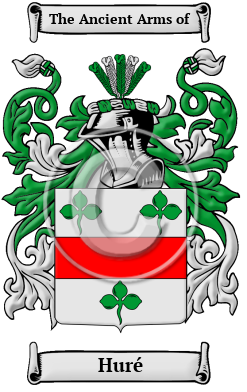 The Huré surname comes from the Old French "hurer" meaning "to bristle," "ruffle," or "stand on end;" as such it was likely a nickname for someone with an untidy head of shaggy hair. Interestingly, this word for someone whose hair sticks up came to be used for the Huron North American Aboriginal people who lived around Lake Ontario. It has been suggested that Huré was also sometimes an occupational name for a sapper, that is, one who laid land mines.

Early Origins of the Huré family

The surname Huré was first found in Normandy (French: Normandie), the former Duchy of Normandy, where the name is mentioned twice in a French Armorial of 1696.

Early History of the Huré family

This web page shows only a small excerpt of our Huré research. More information is included under the topic Early Huré History in all our PDF Extended History products and printed products wherever possible.

Spelling variations of this family name include: Huron, Hurel, Hure, Huré, Huret, Hurard and many more.

More information is included under the topic Early Huré Notables in all our PDF Extended History products and printed products wherever possible.

Migration of the Huré family

Some of the first settlers of this family name or some of its variants were: Pierre Hure, who settled in New France sometime between 1620 and 1765; Catherine Hurelle, who arrived in Montreal in 1654; Jean Huron, who settled in Quebec in 1674.