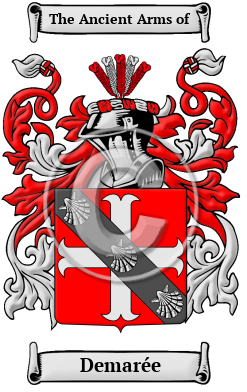 The Demarée surname is a habitational name derived from any of several places named with the Old French words "mareis" or "maresc", meaning "marsh".

Early Origins of the Demarée family

The surname Demarée was first found in Cambray, Normandy (French: Normandie), the former Duchy of Normandy, where ancestors of the family belonged to the house of Bousis. According to Arthurian legend, Sir Hector de Maris (or Ector de Maris), was a Knight of the Round Table, younger half-brother of Lancelot and the natural son of King Ban of Benwick and the Lady de Maris.

Early History of the Demarée family

Notable amongst the family in this period was Baldwin I, Lord of Marets in the 11th century, as well as Hugues Maret, the first Priest at the Benedictine Abbey of Valbenoite, in 1108. Jean Desmarets (1595-1676), Sieur de (Lord of) Saint-Sorlin was the author of many volumes of poetry and critical works, as well as the first chancellor and co-founder of the Académie Française; Nicolas Desmarets, known as the Marquis de Maillebois (1648-1721)...
Another 72 words (5 lines of text) are included under the topic Early Demarée Notables in all our PDF Extended History products and printed products wherever possible.

In the United States, the name Demarée is the 16,197th most popular surname with an estimated 2,487 people with that name. [2]

Demarée migration to the United States +

Demarée Settlers in United States in the 19th Century