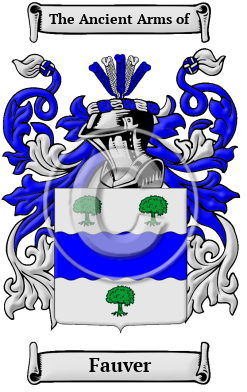 Early Origins of the Fauver family

The surname Fauver was first found in Brittany.

Early History of the Fauver family

Notable amongst this name at this time was Pierre Fauveau, born in Nouaillé (Vienne), in the early sixteenth century, who was a poet; Robert Fauvel, lord of Doudeauville, became councillor at the cour-des-comptes of Normandy in 1633; Thomas Fauvel was lord of Langle in 1696; François-Jacques-René Fauveau was a Brigadier in 1715, Lieutenant in 1730, Captain in 1743, and Lieutenant-Colonel in 1749; Louis-François-Sebastien Fauvel was a famous painter in 1753; André-Joseph Fauvel...
Another 71 words (5 lines of text) are included under the topic Early Fauver Notables in all our PDF Extended History products and printed products wherever possible.

Migration of the Fauver family

Some of the first settlers of this family name or some of its variants were: 25 individuals of the lineage who arrived from France onto Canadian shores between 1600 and 1900. Although most settlers arrived during the nineteenth century, some arrived earlier, such as Jeanne Fauvault, who married in 1669 in Quebec.