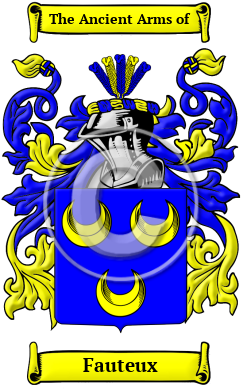 Early Origins of the Fauteux family

The surname Fauteux was first found in Normandy (French: Normandie), the former Duchy of Normandy.

Early History of the Fauteux family

Notable amongst the family in this period was Jean de Fautereau de la Pierre, who was a Brigadier in 1586 in the army of La Valette in Dauphine; the Fautereau house produced a Knight of Malta, and in 1541 a Knight of the Order under Henry III; Georges Fautrel, born in Rouen in 1614, taught rhetoric, philosophy, mathematics, and moral theology; André Fautras became officer of artillery in 1747 and commissioner in 1754, First Lieutenant at the...
Another 77 words (6 lines of text) are included under the topic Early Fauteux Notables in all our PDF Extended History products and printed products wherever possible.

In Quebec, Canada, the name Fauteux is the 872nd most popular surname. [1]

Fauteux Settlers in Canada in the 17th Century

Fauteux Settlers in Canada in the 18th Century