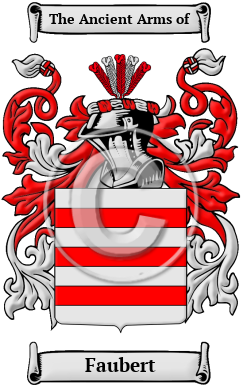 Early Origins of the Faubert family

The surname Faubert was first found in Normandy (French: Normandie), the former Duchy of Normandy, where the family was established in Auberville, a village in Calvados, in the district of Pont-Évêque.

Early History of the Faubert family

Spelling variations of this family name include: Fauber, Fouber, Faubert, Foubert and others.

Notable amongst the family in this period was Pierre Foubert, born in 1696, who was a renowned surgeon in the region of Grenoble, where he was born, for...
Another 27 words (2 lines of text) are included under the topic Early Faubert Notables in all our PDF Extended History products and printed products wherever possible.

Faubert migration to the United States +

Faubert Settlers in United States in the 19th Century

Faubert Settlers in United States in the 20th Century