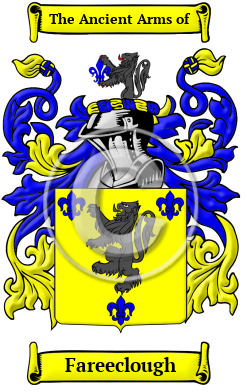 Early Origins of the Fareeclough family

The surname Fareeclough was first found in Lancashire, where Simon de ffairclogh (note the double "f" and the lower case last name) was listed in the Subsidy Rolls of 1332. The name literally means 'dweller in the fair hollow' from the Middle English (clo(u)gh). [1]

Early History of the Fareeclough family

Notable amongst the family at this time was Samuel Fairclough (1594-1677), an English nonconformist divine from Haverhill, Suffolk. He was the youngest of the four sons of Lawrence Fairclough, vicar of Haverhill, by his wife Mary, daughter of John Cole of that town. His second son, Samuel Fairclough...
Another 47 words (3 lines of text) are included under the topic Early Fareeclough Notables in all our PDF Extended History products and printed products wherever possible.

Migration of the Fareeclough family