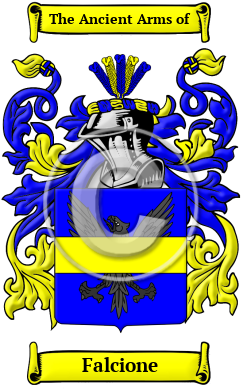 Early Origins of the Falcione family

The surname Falcione was first found in Messina (Sicilian: Missina; Latin: Messana), capital of the Italian province of Messina. Its history begins in 397 B.C. After a checkered history the Saracens took it in 831, and the Normans in 1061. It was host to the crusaders in 1190. Garibaldi landed in 1860 and it was the last city to be made a part of united Italy. The first record of the name was in the year 1000 when the family held estates in Cerami, Comiso, Asaro, Lamotta, in the barony of Domicella. In those ancient times only persons of rank, the podesta, clergy, city officials, army officers, artists, landowners were entered into the records. To be recorded at this time, at the beginning of recorded history, was of itself a great distinction and indicative of noble ancestry.

Early History of the Falcione family

Spelling variations of this family name include: Falcone, Falcione, Falciane and others.

Prominent among bearers of this surname in early times was Lelio Falconieri (1585-1648), an Italian Catholic Cardinal from Florence; Falconieri (Falconiero) (c. 1585-1656), an Italian composer and lutenist from Naples; Aniello Falcone (1600-1665), an Italian Baroque painter...
Another 36 words (3 lines of text) are included under the topic Early Falcione Notables in all our PDF Extended History products and printed products wherever possible.

Migration of the Falcione family