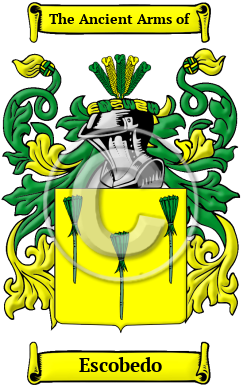 Early Origins of the Escobedo family

The surname Escobedo was first found in Andalucia, in southern Spain.

Early History of the Escobedo family

This web page shows only a small excerpt of our Escobedo research. Another 78 words (6 lines of text) covering the years 1271, 1589, 1669, 1465, 1535 and 1472 are included under the topic Early Escobedo History in all our PDF Extended History products and printed products wherever possible.

Spelling variations of this family name include: Escobar, Escobado and others.

Notable bearers of the family name Escobedo Antonio Escobar y Mendoza (1589-1669) Spanish leading ethicist of his time, born at Valladolid in Castile; Pedro de Escobar (c. 1465-1535), a.k.a. Pedro do Porto, a Portuguese composer of...
Another 35 words (2 lines of text) are included under the topic Early Escobedo Notables in all our PDF Extended History products and printed products wherever possible.

In the United States, the name Escobedo is the 2,109th most popular surname with an estimated 14,922 people with that name. [1]

Escobedo migration to the United States +

Escobedo Settlers in United States in the 19th Century

Escobedo Settlers in United States in the 20th Century