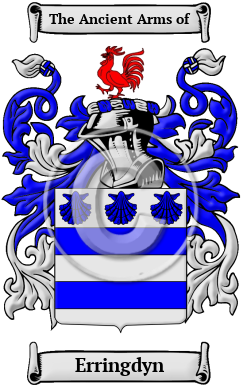 Early Origins of the Erringdyn family

The surname Erringdyn was first found in Northumberland where they held a family seat from very ancient times, some say well before the Norman Conquest and the arrival of Duke William at Hastings in 1066 A.D.

Early History of the Erringdyn family

Although the name, Erringdyn, appeared in many references, from time to time, the surname was shown with the spellings Errington, Erringden, Erington and others.

Notable amongst the family name during their early history was The Blessed George Errington of Hurst Castle (died 1596), English Roman Catholic layman and martyr; Francis Errington (1665-1699), a papist of the landed gentry branch of Walwick Grange, Northumberland; and his...
Another 40 words (3 lines of text) are included under the topic Early Erringdyn Notables in all our PDF Extended History products and printed products wherever possible.

Migration of the Erringdyn family

Gradually becoming disenchanted with life in Ireland many of these uprooted families sailed aboard the armada of sailing ships known as the "White Sails" which plied the stormy Atlantic. These overcrowded ships often arrived with only 60 to 70% of their original passenger list, many dying of cholera, typhoid, dysentery or small pox. In North America, some of the first immigrants who could be considered kinsmen of the Erringdyn family name Erringdyn, or who bore a variation of the surname were Abraham Errington who settled in Charleston Massachusetts in 1630; Thomas Errington settled in Salem Massachusetts in 1635; Richard Errington settled in Virginia in 1642..