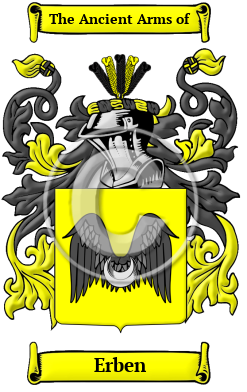 Early Origins of the Erben family

The surname Erben was first found in the Rhineland, where this family was a prominent contributor to the development of the district from ancient times. The earliest record is of "ich Erbo, Erben sun" or "Erbo, son of Erbo," who was a knight in Colmar in 1282. Colman or Kolman, located in Alsace, was a free city of the Holy Roman Empire in 1226. They held a family seat at Strasbourg, where records show Erbo Schonterlin in 1260, and Erbo Mendewin in 1353. Further to the south, there is a record of Joh. Erbe in 1320, in Konstanz, a city on the Swiss border.

Early History of the Erben family

This web page shows only a small excerpt of our Erben research. Another 147 words (10 lines of text) covering the years 1468 and 1531 are included under the topic Early Erben History in all our PDF Extended History products and printed products wherever possible.

More information is included under the topic Early Erben Notables in all our PDF Extended History products and printed products wherever possible.

Erben migration to the United States +

Erben Settlers in United States in the 18th Century

Erben Settlers in United States in the 19th Century