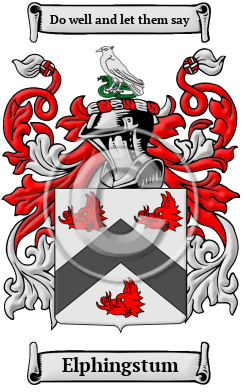 Early Origins of the Elphingstum family

The surname Elphingstum was first found in Midlothian, where they were granted lands by King Robert the I of Scotland. Elvington is a parish in the East Riding or Yorkshire. "This place derives its name, according to some, from the ancient eel-fisheries in the district; according to others, from Aluf, a Saxon, to whom Elvington, then written Alvintone, is described in Domesday Book as belonging: some, again, deduce it from the Latin Alveus." [1]

Early History of the Elphingstum family

Migration of the Elphingstum family