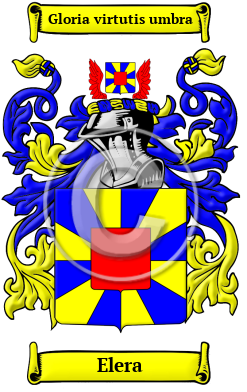 Elera is a local name from the German region of Westphalia. Local names and other types of hereditary surnames began to be used in Germany after the 12th century. They were derived from the name of the place where the original bearer of the name lived. Sometimes local names bear the prefix "von", meaning "of" or "from". This was originally an indication of land-ownership, and was sometimes a mark of aristocracy. The family originally lived by an alder tree. Ancient records reveal the name Elera is derived from the Old German word elre or alre, which means alder. There are also numerous places named Eller in the northern German states, such as the Rhine and Moselle areas, which adopted the name of an old stream called the Ellera. Thus, the name Elera is both a topographic surname, a type of local surname that was given to a person who resided near a physical feature such as a hill, stream, church, or type of tree, and a habitation name, a type of local name that was originally derived from pre-existing names for towns, villages, parishes, or farmsteads.

Early Origins of the Elera family

The surname Elera was first found in Westphalia, where the family emerged in mediaeval times as one of the notable families of the region. From the 13th century the surname was identified with the great social and economic evolution which made this territory a landmark contributor to the development of the nation.

Early History of the Elera family

This web page shows only a small excerpt of our Elera research. Another 77 words (6 lines of text) covering the years 1354, 1424, 1680, 1690 and 1730 are included under the topic Early Elera History in all our PDF Extended History products and printed products wherever possible.

Many cultural groups lived in the German states in medieval times. Each had its own dialect and traditions, and unique variations of popular names. Low German, which is similar to contemporary Dutch, was spoken in Westphalia. German names are characterized by additions such as regional suffixes and phrases that tell something about the origin or background of its original bearer. Further contributing to the variation in German names was the fact that there were no spelling rules in medieval times: scribes recorded names according to their sound. The recorded spelling variations of Elera include Eller, Ellers, Eler, Aller, Aler, Ellern, Ellere, Elera, Ellera, Ellerer and many more.

Notables of the period with the name Elera were Wolf Ernst von Eller (d. 1680), who was the Governor of Minden and Sparenberg, a military general, and Privy Councillor for defense to the prince...
Another 34 words (2 lines of text) are included under the topic Early Elera Notables in all our PDF Extended History products and printed products wherever possible.

Migration of the Elera family