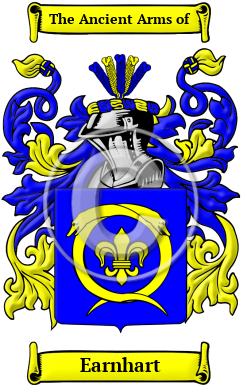 The ancestral home of the Earnhart family is in the German province of Bavaria. Earnhart is a German nickname surname. Such names came from eke-names, or added names, that described their initial bearer through reference to a physical characteristic or other attribute. It is a name for a courageous or honorable person. The surname Earnhart is composed of two German words meaning honor and bravery.

Early Origins of the Earnhart family

The surname Earnhart was first found in Bavaria, where the name emerged in mediaeval times as one of the notable families of the region. From the 13th century the surname was identified with the great social and economic evolution which made this territory a landmark contributor to the development of the nation. Saint Erhard of Regensburg was bishop of Regensburg in the 7th century. He was also known as Abbot Erhard of EbersheimMunster. He was canonized on the 8th of October 1052, by Pope Leo IX.

Early History of the Earnhart family

In the medieval era, many different cultural groups lived in the German states. There are thus many regional variations of German surnames from that era. Westphalians spoke Low German, which is similar to modern Dutch. Many German names carry suffixes that identify where they came from. Others have phrases attached that identify something about the original bearer. Other variations in German names resulted from the fact that medieval scribes worked without the aid of any spelling rules. The spelling variations of the name Earnhart include Ehrhardt, Ehrhart, Erhart, Erhard, Erhardt, Errheart, Errhart, Errhard, Errhardt, Earhart, Airhart and many more.

Prominent among members of the name Earnhart in this period include Friedrich Ehrhardt, commander of the 8th Prussian infantry brigade, who was ennobled in 1854; D. Johann Ehrhart, director of the medical school at the University of Innsbruck, was ennobled in the first half of the 19th century; he was known for his work on a Salzburg medical magazine that he had taken over in 1808. Erard was the name borne by this firm of harp and pianoforte makers has been known almost as long in England as in France, its workshops having been established in London near the close of the...
Another 230 words (16 lines of text) are included under the topic Early Earnhart Notables in all our PDF Extended History products and printed products wherever possible.

Migration of the Earnhart family

The great European flow of migration to North America, which began in the middle of the 17th century and continued into the 20th century, was particularly attractive to those from Bavaria who wished to escape either poverty or religious persecution. For many Bavarian tenant farmers, the chance to own their own land was a major incentive. So the widespread colonization of the United States began in 1650, when many immigrants from Germany settled in pockets in Pennsylvania, Texas, New York, Illinois, and California. In Canada, German settlement centered in Ontario and the prairie provinces. Among those of this surname listed in various historical records were: Henrich Ehrhardt, who settled in New York in 1709-1710; Heinrich Ehrhart, who settled in Philadelphia in 1766; Johan Ehrhart settled in Philadelphia in 1749.