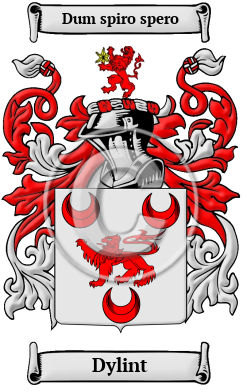 The surname is one of the Anglo-Norman names that arrived in Ireland in the wake of the 12th century invasion by Richard "Strongbow" de Clare, 2nd Earl of Pembroke. The surname Dylint belongs to the large category of Anglo-Norman habitation names, which are derived from pre-existing names for towns, villages, parishes, or farmsteads. Originally, these place names were prefixed by de, which means from in French. The name of the Dylint family comes from the name of the town of Lyon in central France. In France, the name may also have been a nickname for a fierce or brave warrior, as derived from the Old French word "lion," which meant "lion." The Irish Gaelic form of the surname Dylint is Diolún.

Early Origins of the Dylint family

The surname Dylint was first found in at Drumrany in County Westmeath (Irish: An Iarmhí) in the Irish Midlands, province of Leinster, where they were the Barons of Drumrany. The Dillon family is descended from Sir Henry de Leon, a member of a noble Breton family who came to Ireland in 1185, in the service of the Earl of Morton, who later became King John. For de Leon's service, King John granted him MacCarrons territory, part of Annaly, and other vast possessions, including a castle at Dunimon.

Early History of the Dylint family

Medieval scribes and church officials spelt names simply the way they sounded, which explains the various name spelling variations of the name Dylint that were encountered when researching that surname. The many spelling variations included: Dillon, Delion, Dilune, Dilon, Dylon, Dillan, Dillen and many more.

Migration of the Dylint family

During the middle of the 19th century, Irish families often experienced extreme poverty and racial discrimination in their own homeland under English rule. Record numbers died of disease and starvation and many others, deciding against such a fate, boarded ships bound for North America. The largest influx of Irish settlers occurred with Great Potato Famine of the late 1840s. Unfortunately, many of those Irish that arrived in Canada or the United States still experienced economic and racial discrimination. Although often maligned, these Irish people were essential to the rapid development of these countries because they provided the cheap labor required for the many canals, roads, railways, and other projects required for strong national infrastructures. Eventually the Irish went on to make contributions in the less backbreaking and more intellectual arenas of commerce, education, and the arts. Research early immigration and passenger lists revealed many early immigrants bearing the name Dylint: William Dillon who settled in St. John's, Newfoundland in 1796; John Dillon settled in St. John's in 1814; Moses Dillon settled in Harbour Grace in 1814.