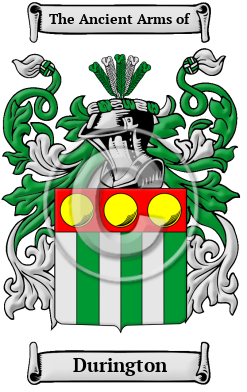 The ancestors of the bearers of the Durington family name are thought have lived in ancient Anglo-Saxon England. They were first found in the village of Dorrington, in the county of Lincolnshire. Alternatively, the name could have been derived from Durrington, parishes in West Sussex and Wiltshire. In both cases the parishes are listed in the Domesday Book of 1086 as Derintone and Derentune, respectively. The Wiltshire parish is unlikely as "this parish, which is situated on the river Avon, appears to have belonged in part, for centuries, to the family of Poore, descendants in a direct line from the founder of Salisbury Cathedral, " [1] but that leaves the West Sussex parish in question.

Interestingly, RAF Durrington was a World War II ground-controlled interception (GCI) radar station in Durrington, West Sussex. The station has been repurposed as Palatine School, a school for those with special educational needs.

Early Origins of the Durington family

The surname Durington was first found in Lincolnshire at Dorrington, a village and civil parish in the North Kesteven district.

The village dates back to the Domesday Book where it was listed at Derintone and literally meant "estate associated with a man called Deora," from the Old English personal name + ing + tun. [2] Dorrington, Shropshire is a large village about 6 miles (10 km) south of Shrewsbury. This village dates back to 1198 when in was listed as Dodinton and has a similar origin and meaning as the latter entry.

Early History of the Durington family

This web page shows only a small excerpt of our Durington research. Another 65 words (5 lines of text) covering the years 1654 and 1715 are included under the topic Early Durington History in all our PDF Extended History products and printed products wherever possible.

Until quite recently, the English language has lacked a definite system of spelling rules. Consequently, Anglo-Saxon surnames are characterized by a multitude of spelling variations. Changes in Anglo-Saxon names were influenced by the evolution of the English language, as it incorporated elements of French, Latin, and other languages. Although Medieval scribes and church officials recorded names as they sounded, so it is common to find one person referred to by several different spellings of his surname, even the most literate people varied the spelling of their own names. Variations of the name Durington include Dorrington, Dorington, Dorryngton, Doryngton and others.

Another 38 words (3 lines of text) are included under the topic Early Durington Notables in all our PDF Extended History products and printed products wherever possible.

Migration of the Durington family

Searching for a better life, many English families migrated to British colonies. Unfortunately, the majority of them traveled under extremely harsh conditions: overcrowding on the ships caused the majority of the immigrants to arrive diseased, famished, and destitute from the long journey across the ocean. For those families that arrived safely, modest prosperity was attainable, and many went on to make invaluable contributions to the development of the cultures of the new colonies. Research into the origins of individual families in North America revealed records of the immigration of a number of people bearing the name Durington or a variant listed above: Nicholas Dorington who settled in Virginia in 1623; Charles, Michael, Thomas, William, and William George, all arrived in Philadelphia between 1773 and 1875..