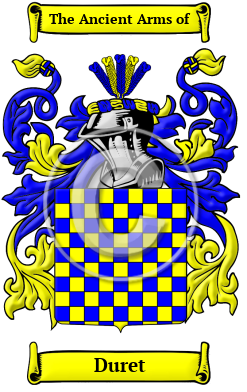 The Duret surname evolved from the Old French word "dur," meaning "hard," or "hardy." In some instances the name may have developed from the prefix "de" meaning "son of," as in de Huré becoming Duré.

Early Origins of the Duret family

The surname Duret was first found in Brittany, originally Armorica in ancient times, where the family has been a prominent family for centuries, and held a family seat with lands and manor. The family were well established in the region of Dol and several members of the family distinguished themselves through their contributions toward the community in which they lived and were rewarded with lands, titles and letters patent confirming their nobility. They were anciently the Lords and Counts of Auvergne and Brettagne.

Early History of the Duret family

Notable amongst this name at this time was John Durel (1625-1683), Dean of Windsor, born at St. Heliers, Jersey, in 1625, and entered Merton College, Oxford, in...
Another 26 words (2 lines of text) are included under the topic Early Duret Notables in all our PDF Extended History products and printed products wherever possible.

In France, the name Duret is the 835th most popular surname with an estimated 6,114 people with that name. [1]

Duret migration to the United States +

Duret Settlers in United States in the 18th Century

Duret Settlers in United States in the 19th Century

Duret Settlers in New Zealand in the 19th Century