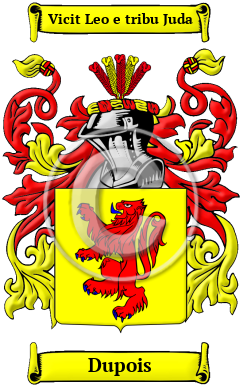 Early Origins of the Dupois family

The surname Dupois was first found in Languedoc where they anciently held lands and estates.

Early History of the Dupois family

Another 46 words (3 lines of text) are included under the topic Early Dupois Notables in all our PDF Extended History products and printed products wherever possible.

Migration of the Dupois family

Some of the first settlers of this family name or some of its variants were: Charles Dupuis, who settled in Annapolis, Maryland, in 1763; Christopher DuPui settled in Philadelphia in 1860; Pierre Dupuit settled in Maryland in 1763.