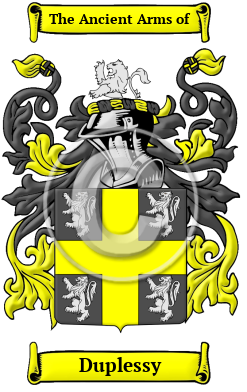 Noble surnames, such as Duplessy, evoke images of the ancient homeland of the French people. The original bearer of the name Duplessy, which is a local surname, once lived, held land, or was born in the beautiful region of Maine. In France, hereditary surnames were adopted according to fairly general rules and during the late Middle Ages, names that were derived from localities became increasingly widespread. Local names originally denoted the proprietorship of the village or estate.The Duplessy family originally derived its surname from the place called Plessis, which was in Maine.

Early Origins of the Duplessy family

The surname Duplessy was first found in Maine. The name Du Plessis is cited since the thirteenth century with a family of Chantillon, originally from Maine, who possessed the marquisate of Nonant. Geoffroy Du Plessis, chancellor of the Church of Tours and vicar, was elected bishop of Évreux, a commune located in Normandy, in 1310. Perrot Du Plessis was a squire in 1355.

Nicolas Duplessis settled at Cap-de-la-Madeleine, Quebec during the 17th century. In 1663, after his arrival in Canada, Nicolas married Marie Crevier, daughter of Christophe and Jeanne (née Enrad). [1]

Early History of the Duplessy family

This web page shows only a small excerpt of our Duplessy research. More information is included under the topic Early Duplessy History in all our PDF Extended History products and printed products wherever possible.

Notable amongst the family at this time was Philippe Du Plessis-Mornay, lord of Plessis-Marly and a diplomat around 1549; Bertrand Du Plessis was councilor at the cour-des-aides of Perigueux in 1554; Jacques Du Plessis was bishop of Lucon in 1586; Suzanne de Bruc was marquise of Du Plessis in 1605 and her children carried the lineage; Jacques de Rougé marquis of Du Plessis was lieutenant-colonel in 1627; Guillaume Du Plessis de la Brunetière, born at the diocese of Angers in 1630, was bishop of Saintes; Pierre-Michel Du Plessis was an architect and engineer of the king in 1690; François-Xavier Du Plessis...
Another 104 words (7 lines of text) are included under the topic Early Duplessy Notables in all our PDF Extended History products and printed products wherever possible.

Migration of the Duplessy family

Some of the first settlers of this family name or some of its variants were: 160 individuals of the lineage who arrived from France onto Canadian shores between 1600 and 1900. Among them, Anne Duplessis married in 1665 in Quebec.