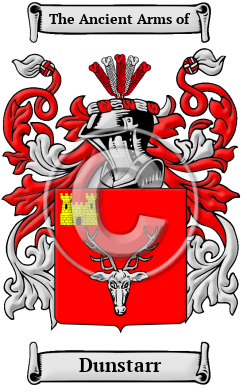 The present generation of the Dunstarr family is only the most recent to bear a name that dates back to the ancient Anglo-Saxon culture of Britain. Their name comes from having lived in the parish of Dunster in the county of Somerset. The place-name is derived from the Old English word Dunntorr, which refers to a rocky peak.

Early Origins of the Dunstarr family

The surname Dunstarr was first found in Somerset at Dunster, home of Dunster Castle, a former motte and bailey castle, now a country house owned by the National Trust, which operates it as a tourist attraction. The location has been fortified since the late Anglo-Saxon period and the by the 11th century, William de Mohun had constructed a timber castle on the site.

Early History of the Dunstarr family

Until the dictionary, an invention of only the last few hundred years, the English language lacked any comprehensive system of spelling rules. Consequently, spelling variations in names are frequently found in early Anglo-Saxon and later Anglo-Norman documents. One person's name was often spelled several different ways over a lifetime. The recorded variations of Dunstarr include Dunster, Dunstar, Dunstarr, Dunsterr and others.

Notables of the family at this time include Henry Dunster (1609-1659), born in Lancashire, England, he emigrated to America in 1640 and became the first president of Harvard University. He was the son of Henry Dunster of Balehoult, Bury, Lancashire. [1] Another Henry Dunster (1618-1684), was an English merchant...
Another 47 words (3 lines of text) are included under the topic Early Dunstarr Notables in all our PDF Extended History products and printed products wherever possible.

Dunstarr Settlers in West Indies in the 17th Century